Wow, you’ve got so many options. You’re talented, you’re hard-working and you’ve basically created a name for yourself by being able to take on whatever projects and challenges get thrown your way. And doing them well. That’s your superpower. You’re a master of all.

Now I hear that you’re wanting to do more than react to what’s immediately in front of you. You’d like to be more intentional about the next step you take in your life and career. Yet the pressure of needing to actively define what your future looks like has got you paralyzed. All you know for sure is that it’s got to be a better place – and right now it’s feeling a little grey and fuzzy.

First of all, I want you to know that all of this is okay. And secondly, I’m going to bust a few myths that might just be holding you back:

The truth is, intensive planning is very likely a way in which you keep yourself in status quo. It’s a safe and familiar place for you, and it’s a great way to avoid action. Your life/career path isn’t an event like a wedding, in which you can control (for the most part) the details of the day. Your path is going to have surprises, some of them unwelcome, and some of them providing critical feedback to help you decide what happens next. TRY THIS – Let go of the Microsoft Project Plan and take a moment to quickly draw or jot down the plan that you can envision thus far. I’ll bet you anything it is good enough to take one simple step forward, in the name of creating a different future for yourself.

Myth #2 – You can figure this out on your own

One of your talents is definitely the ability to do things on your own. In fact, you’ve become quite the superstar in that regard, teaching yourself new concepts and tools, mastering new areas of expertise, figuring out the most complex problems and ALL BY YOURSELF! Consider, however, that even though this has been successful for you in the past, it’s not enough to get you to that next stage in your career. Remember that quote from Einstein? “Insanity is doing the same thing over and over again and expecting different results.” Well it’s true. Stop your own insanity now, and TRY THIS — For just one day, push aside your need to do it yourself, and ask the people you know for their ideas, their feedback, their support, their opinion. It won’t hurt – I promise!

Hmmm, this mindset seems to come from the risk-averse corner and is usually voiced by people who want to see us safe – people like our parents. It is true, we need to be grateful for what we have. At the same time, looking for something else does not mean that you are being ungrateful. I think that over time, we have collapsed the two into one smushy belief. So let’s un-smush it. Good! Now you get to be grateful for what you do have, and you also get to look for what you want, because I’m pretty sure you’re not finished with this life of yours!
Now that we’ve cleared some debris from the path, what are you seeing? What big or baby steps can envision taking towards that awesome future vision of yours? 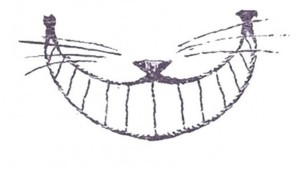 And for those of you whose vision still feels murky, I share with you this passage from Alice in Wonderland:

“Would you tell me, please, which way I ought to go from here?”
“That depends a good deal on where you want to get to,” said the Cat.

“I don’t much care where–” said Alice.
“Then it doesn’t matter which way you go,” said the Cat.
“–so long as I get SOMEWHERE,” Alice added as an explanation.
“Oh, you’re sure to do that,” said the Cat, “if you only walk long enough.”(1)

Apparently, the above passage has often been misquoted as the following: “If you don’t know where you’re going, any road will get you there.” I give you the misquotation as well – use it wisely!

Wondering with you!
Carolyn

Carolyn Ou is a Career/Leadership Coach who excels at devising and delivering simple solutions to address complex problems in leadership, careers and life. For more information, or to schedule a complimentary consultation, email carolyn@sandboxco.com.

So you said YES the other day, and deep down, your gut was screaming out NOOOOO! Not again!

It’s the same old story. In an effort to help out or to save the day, that YES comes flying out, time after time.

In many cases, we say YES just because we can. Because helping out has become second nature, and quite frankly, we’re pretty awesome at swooping in and saving a project, at rejiggering an entire process and creating something even more efficient, or at putting into action something that’s been in idea mode for waaay too long.

So how’s it working for you?

Yeah, I thought so.

One way to break out of the cycle of YES is to get really honest with yourself about what’s on the other side of YES. Very likely, it’s not what you have rationalized on the surface – more likely, it’s what your gut has been trying desperately to tell you.

The next time you are tempted to say YES, ask yourself these questions, and be sure include your gut in the discussion:

Wishing you a future of guilt-free and liberating NO’s, as well as clear space for the exhilarating YES’s you very much deserve.

Carolyn’s Update: I first wrote this piece last October, but ever since have had the nagging feeling that there was a role missing among the three listed — the Entrepreneur, the Manager and the Technician. Having worked with a number of Entrepreneurs who are in the trenches on a daily basis, and hearing them speak of their daily struggle to keep it all going and to stay sane, I realized that this model needs another entity mixed in, one that I’ll call “GURU.”

Guru is the one that’s going to ask the tough questions or point out the simple answers that are right in front of you. Sometimes Guru is going to tell you to get really quiet and listen to what your gut is telling you. Very often, Guru is going to tell you to get some rest, because the Guru knows how to see beyond all the chaos. So as you read this piece, add in the role of GURU to the mix, and I think you’ll find it a much more complete team!

“Craziest Boss You’ll Ever Have”

You know the type – one moment envisioning a grand, bright and beautiful future, the next moment, having a panic attack because you’re not meeting your deadlines, and then the next, vanishing for the weekend, only to be found hiding in a café finishing that research … or simply reading a really good book!

That’s right. It’s that crazy boss of yours, and every day you wonder how on earth she ever got the job.

Well, I have a secret to share with you.

It’s your fault she has the job.

Because your crazy boss is YOU!

Think about it. Who is the dreamer who gets excited about each new vision for your life? Who is the manager who creates and lives by the plan to make it happen?  And who is the doer who just wants to focus on the business of living? What happens every time the dreamer in you comes up with something new? Does the manager flip out because now you’re off track? And the doer – does she just want to finish what she’s working on?

It’s your very own 3-headed monster, and it’s not so different from the three-way battle that Michael Gerber describes in his classic book, The E-Myth Revisited. In it, Gerber writes of a business owner’s classic conflict between The Entrepreneur, The Manager and The Technician. These three roles are critical to running a business, yet they are roles that are in perpetual conflict, and in many cases, roles that exist within the single entity of the business owner!

Here are some brief definitions from the text – as you read them, consider the parallels to your own work and life. Think about which role is your dominant one, as well as the situations that allow the other two to show up:

“The Entrepreneur is our creative personality – always at its best dealing with the unknown, prodding the future, creating probabilities out of possibilities, engineering chaos into harmony.”

“The Manager personality is pragmatic. Without the manager there would be no planning, no order, no predictability.”

“Put another way, while the Entrepreneur dreams, The Manager frets, and The Technician ruminates.”

Source: The E-Myth Revisited: Why Most Small Businesses Don’t Work and What to Do About It, by Michael Gerber (New York: HarperCollins, 1995).

So what can you do to start managing this multiplexity?? (Yes, I made that up…)

Give your boss time to grow on you. Remember that none of the personae are absolutely wrong. Identifying how they operate is the first step towards intentionally and effectively flexing between the different roles as you continue to steer the course of your crazy life!

Crazy with you,
Carolyn

For more information, email me at