I hate being scooped.

The first time it happened was in 1989. I was 21 and Amy Tan had published the book that I always wanted to write. You might know it – it was The Joy Luck Club – and her portrayals of the Asian mother- Asian-American daughter relationships truly resonated with me.

“Damn! I thought. That was supposed to be MY magnum opus!”

At that time, a little voice in me said, “See? You’re too late! Try something else!”  At some level, I think that’s what I did. I let go of any literary ambitions I had to pursue a more practical, safer, less failure-guaranteeing path.

Now, more than 20 years later, it’s happened again! Just last week, in planning my next piece, I drew this diagram on a napkin:

My goal in creating this piece was to ease your pain and reassure you that it isn’t always necessary or beneficial to barrel towards an often ill-defined notion of success — that sometimes taking the blinders off can result in greater opportunities to create the right path for yourself.

And then I saw it, a very similar diagram in an article that carries some very similar messages to the one I was drafting: 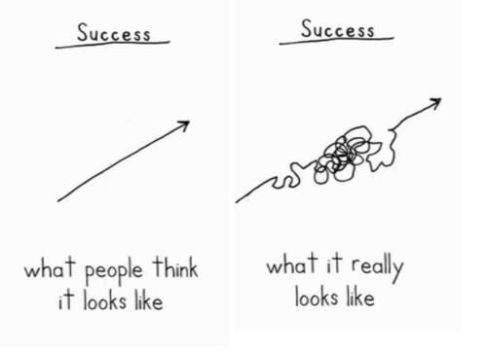 At first, I wanted to feel scooped again, just like the Amy Tan incident. A voice in me wanted to say, “See, look! What you’re doing is nothing new. Give it up! Climb back into your hole!”

But before that voice could even take over, a different one sounded out. This one said, “See? The ideas and insights you have are shared by many. Don’t stop sharing them. Don’t go silent.”

And I won’t go silent! I will persist in spreading the idea that you don’t need to buy into the old mindsets about what success looks like and how you are supposed to get there. I will persist in sharing my belief that there are simple, creative and alternative ways for you to design a life that works for you.

But being a wise and extremely efficient woman, I also know when it’s enough to share someone else’s wise words, which I share with you today in this valuable post from LinkedIN: Don’t Let a Good Plan Get In the Way.

Cool. That didn’t hurt one bit! And what a great feeling to know I’m not alone.

Smirking from the Sandbox,
Carolyn

For more information, email me at